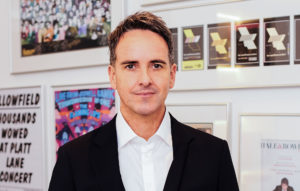 Growing up in Altrincham, Greater Manchester, Sacha left Manchester Grammar School with two Us and an E at A-level. Two decades later, he holds one of the most prominent positions in the North, advising directly into Andy Burnham, Mayor of Greater Manchester, and has founded some of the biggest and best music events in Europe – The Warehouse Project and Parklife festival.

In 1994 he approached legendary music venue The Hacienda with the idea of a mid-week rave night and laid the foundations for a passion which has since proliferated through his home city and overseas. After his Hacienda nights proved enormously successful, Sacha went on to buy a defining part of the Manchester music scene, Sankey’s Soap in 2000, selling his share in 2006 to launch the Warehouse Project with Co-Founder Sam Kandel. Parklife quickly followed in 2010 – a weekend that has become the nation’s largest metropolitan festival, hosting some of the biggest names in music, including Snoop Dogg, Liam Gallagher and Skepta. The annual festival employs over 4,500 people over the weekend and brings more than £10million into the local economy. Each year, it raises over £100k for the Parklife Community Foundation, that is distributed to help local causes.

In 2018, Mayor of Greater Manchester, Andy Burnham, appointed Sacha as the region’s first ever Night Time Economy Adviser. In his role, he has announced a raft of recommendations to improve safety, transport and cultural diversity in the region, including the development of night-time transport links.

Away from the boardroom, Sacha lives in Manchester with his partner, Demi, and miniature Dachshund. He is a charismatic and engaging entrepreneur, leader and speaker who is well respected figure in the music, entertainment, hospitality and political sectors.