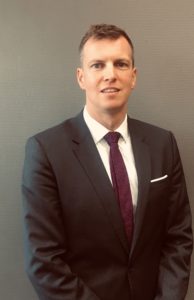 Michael was educated at both West Cheshire College and Westminster Kingsway College, where his love for hospitality began. Michael spent the earlier part of his career in London, working as Head Waiter at Michelin-starred The Greenhouse Restaurant in Mayfair and Restaurant Manager at the 5 star Pennyhill Park Hotel. After 12 years in London he decided to return to the North of England where he took on the role as General Manager at DeVere Village Urban Resorts in Manchester, shortly after this in 2013 he assisted D&D London with the opening of the Crafthouse and Angelica in Leeds.

Michael joined Moran Bewley’s Hotel Group in 2013 as General Manager of Bewley’s Hotel Leeds. A short time later Dalata Hotel Group, Ireland’s largest hotel operator, took ownership of both the Leeds and Manchester properties. In 2015 Michael oversaw the re-brand of both properties to Clayton Hotels and is now General Manager of Clayton Manchester Airport. The hotel has 365 bedrooms, 19 meeting rooms, 150 cover restaurant, 120 cover bar and is the largest hotel within Dalata’s UK portfolio. Michael has always been passionate about hospitality, food, wine and the culinary arts and is looking forward to Dalata’s upcoming developments planned across the UK.